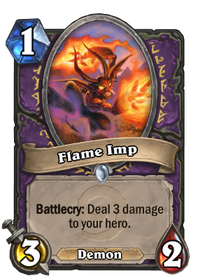 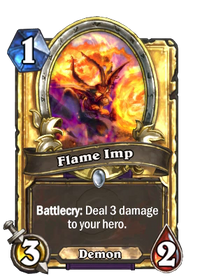 Battlecry: Deal 3 damage to your hero.

Flame Imp is a common warlock minion card, from the Classic set.

Flame Imp can be obtained through Classic card packs, through crafting, or as an Arena reward.

The cost of the Flame Imp's low mana cost is paid for with the player's health. As a 1 mana 3/2 minion, the Flame Imp provides the warlock with a cheap alternative for early game pressure and burst. Consider the fact that you can drop this on turn 1 and on turn 2 you buff it with Demonfire to make it a 5/4, making for very good early pressure.

A staple pick for aggressive warlock decks, the Flame Imp is ideally played on turn 1, often alongside a Voidwalker, shielding it from attack. Flame Imp generally loses its value as the game progresses, as mana becomes more plentiful and Health generally less so.

It has great synergy with Floating Watcher, immediately giving the Watcher +2/2 due to his hero-damaging Battlecry.

Summon
Yeah, I'll get right on it.

Attack
Is this really necessary?