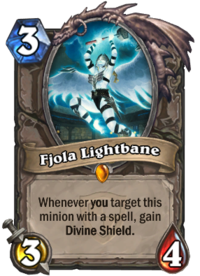 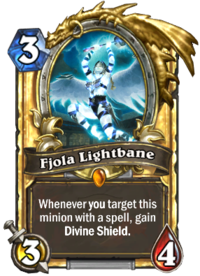 Whenever you target this minion with a spell, gain Divine Shield.

LOVES being called "the wonder twins".

Fjola Lightbane is a legendary neutral minion card, from the Grand Tournament set.

Fjola Lightbane can be obtained through The Grand Tournament card packs purchased online from the Battle.net shop, or through crafting.

Strong with classes that have a lot of minion buffing cards (priest, paladin, druid). A potentially good target for Spare Parts buffs.

One of the stronger combos is Fjola Lightbane + Mark of the Wild, yielding a 5/6 minion with Taunt and Divine Shield for only 5 mana — effectively a stronger and cheaper Sunwalker, at the cost of burning an extra card.

Summon
You have been measured and found wanting.
Attack
Unworthy. 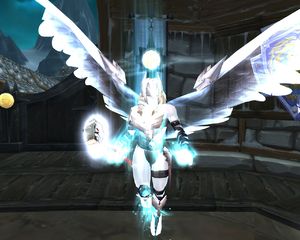 "Only by working together will you defeat the final challenge. From the depths of Icecrown come two of the Scourge's most powerful lieutenants -- fierce val'kyr, winged harbingers of the Lich King!
—Tirion Fordring

Fjola is the twin of Eydis Darkbane, two val'kyr who together feature as the Twin Val'kyr, an encounter in the Argent Tournament's Trial of the Crusader raid.

"The Twin Val'kyr, Fjola Lightbane and Eydis Darkbane, are a pair making up the fourth (and ostensibly final) encounter in the Trial of the Crusader raid. They both share the same health pool much like the Twin Emperors. Fjola and Eydis are two very powerful val'kyr that were originally sent by the Lich King along with their Vengeful Val'kyr army to disrupt, destroy, and terrorize the Argent Tournament and its citizens. But during this attack Argent Confessor Paletress comes to the defense of the tournament and battles the twins. Paletress is victorious, and Fjola and Eydis are captured. Their bonds are maintained by Priestess Alorah and Priest Grimmin. They later appear as the "final" challenge of the coliseum after the raid has defeated the Faction Champions. 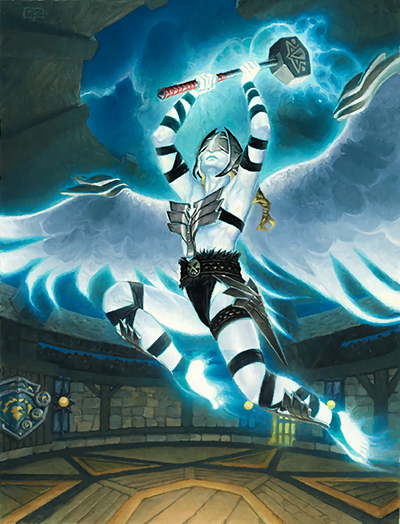