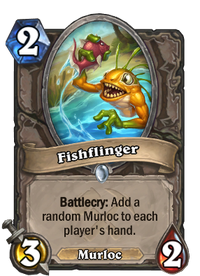 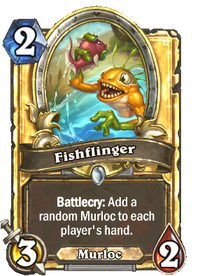 Battlecry: Add a random Murloc to each player's hand.

The scent of fish lingers on the fishflinger's fish fingers.

Fishflinger is a common neutral minion card, from the Saviors of Uldum set.

Fishflinger can be obtained through Saviors of Uldum card packs, through crafting, or as an Arena reward.

As a cheap and well-statted murloc, Fishflinger fits well into murloc decks, even for its stats alone, as well at giving you more resources. While it also gives the opponent a murloc, it's generally more beneficial for the person playing this card, since their deck is built to take advantage of murloc synergies. It does potentially become a bigger issue against other murloc decks, however.