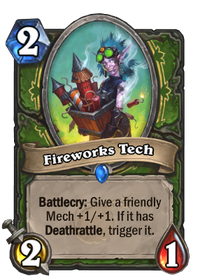 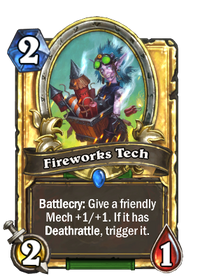 Battlecry: Give a friendly Mech +1/+1. If it has Deathrattle, trigger it.

She learns by trial and error. Mostly error.

Fireworks Tech is a rare hunter minion card, from The Boomsday Project set.

Fireworks Tech can be obtained through The Boomsday Project card packs, or through crafting.

Fireworks Tech is a solid staple card for Mech-based Hunter decks, particularly the one that utilizes Goblin Bombs, which allows them to attack and push for direct damage. Other good targets for this card are Mecharoo, Spider Bomb, and Mechanical Whelp.

If a minion has been given multiple Deathrattles, such as through the effect of Cybertech Chip, Fireworks Tech will trigger all of them at once on the selected minion.

Summon
Ooh, I wonder what this does!
Attack
Whoops!