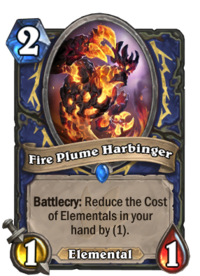 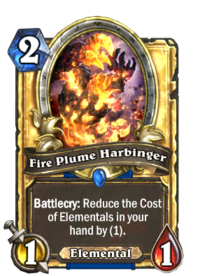 Battlecry: Reduce the Cost of Elementals in your hand by (1).

Fire Plume Harbinger is a rare shaman minion card, from the Journey to Un'Goro set.

Fire Plume Harbinger can be obtained through Journey to Un'Goro card packs bought through the ingame Shop, purchased online from the Battle.net shop, or through crafting.

A weak minion by itself, but shines when its Battlecry affects multiple other Elementals in the player's hand. This card is also an Elemental itself, and can help trigger tribal Battlecries.

Attack
You will kneel!

Fire Plume Harbinger is voiced by .