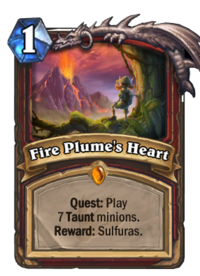 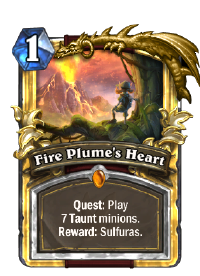 Why does an active volcano need to be defended? To save its ash.

Fire Plume's Heart is a legendary warrior spell card, from the Journey to Un'Goro set.

Fire Plume's Heart can be obtained through Journey to Un'Goro card packs, or through crafting. 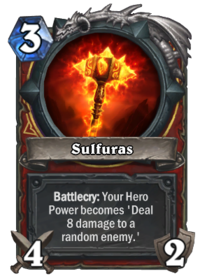 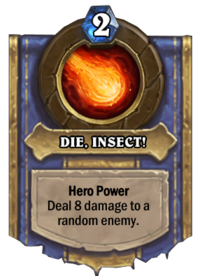 This quest is fairly easy to complete. The best way to do this Quest is using a Control Warrior deck, and running slightly heavier on Taunts than usual. Warrior has access to some powerful Taunt minions, including Tar Lord, Alley Armorsmith, and Bloodhoof Brave. You can also use Stonehill Defender, Phantom Militia, and Direhorn Hatchling to generate multiple Taunts.

Once you have Sulfuras, you might not want to play it immediately since it changes your hero power to DIE, INSECT! as soon as you equip it. If you're low on health but in an otherwise good state on the board, consider using your hero power and then equipping the weapon. If you're in a very poor position, hold off on using the weapon until you stabilize, unless of course the weapon swings and 8 damage will help you recover. If you have board control and a comfortable amount of health, equip Sulfuras right away, since DIE, INSECT! is far more powerful in the long run than Armor Up!.

Sulfuras and DIE, INSECT! make a powerful combination. The weapon is fairly strong and can kill two medium minions or deal 8 damage to your opponent. The Hero Power is extremely valuable, being able to kill large minions repeatedly for only two mana. There is an element of randomness to the hero power, however. Trade before using it to maximize your chances of hitting your wanted target. While there is always a chance that it will hit your opponent's Hero rather than a minion, keep in mind that enough blasts of DIE, INSECT! to the face will quickly end the game, regardless. Alternatively, focus on clearing your opponent's board each turn, guaranteeing 8 damage to their hero and putting them on a very fast clock.

Fire Plume Ridge is a volcano in Un'Goro Crater. It contains fire elementals which drop Essence of Fire, an ingredient used for crafting Sulfuron Hammer.

Fire Plume Ridge is the volcano in the center of Un'Goro Crater. Lava flows down the sides of the mountain, where Fire Elementals can be found. The strongest of all fire elementals in Un'Goro, Blazerunner, lives within a cave at its peak.

The hottest place in the ridge is apparently 428,000 degrees Kraklenheit.

Ringo came to the ridge to explore and ended up getting lost and now suffers from heat exhaustion, he can be found in the southern cave.