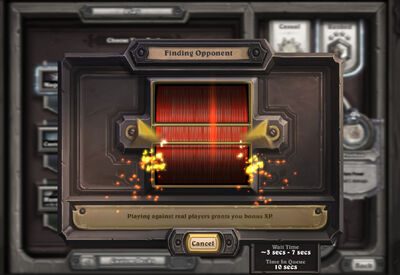 The Finding Opponent screen, also known as the loading screen, or the "Spinner", is the holding screen presented while the system is finding a suitable opponent for the player to battle in either Play mode, Arena or Tavern Brawl. It has several notable features, including special music, helpful tips and comical elements. It depicts a large mechanical spinner containing the descriptions of possible players, from which the player's opponent is supposedly chosen, representing the game's matchmaking process.

The Finding Opponent process can be stopped by clicking on the 'Cancel' button any time before a match is made. The screen otherwise persists until the matchmaking process is complete, at which point the battle begins automatically.

The Solo Adventures equivalent of the Finding Opponent screen is the Starting Game screen.

The Finding Opponent screen is notable for its music. A selection of pieces are featured, including several from the early Warcraft RTS game Warcraft II: Tides of Darkness. Players can load a new music selection by cancelling and restarting the matchmaking process.

Tips are offered to players on the Finding Opponent screen. Tips are randomly chosen from a selection of possible tips, partly determined by the current game mode. For a full list, see Tips. 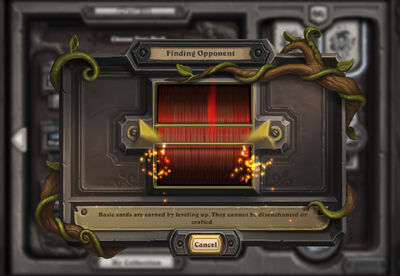 The description chosen is always the same: "Worthy Opponent". However, the other possible, yet never quite selected opponents' descriptions vary and are: