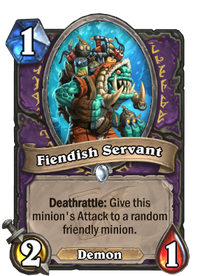 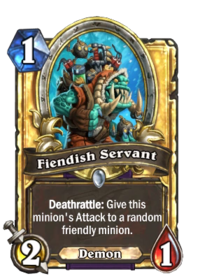 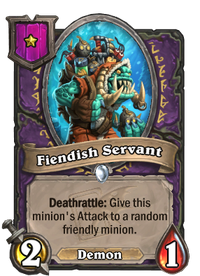 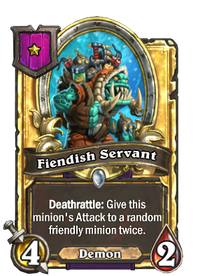 Deathrattle: Give this minion's Attack to a random friendly minion.

Putting the "r" in fiend.

Fiendish Servant is a common warlock minion card, from the Galakrond's Awakening set.

You can treat this as a 1-mana 2/1 with Deathrattle of simply giving a random friendly minon +2 Attack. However, it can be dangerous once buffed with Void Analyst or Arena Fanatic in the hand, or Grim Rally or Mal'Ganis on the board, and can give double value with Soul Infusion or Abusive Sergeant.

Fiendish Servant is a wyrmtongue.

Wyrmtongues are a race of diminutive demons in service to the Burning Legion, mostly used for manual labor.

Wyrmtongues use their own special kind of portals to haul in treasures. They take their treasures to the Legion ship the Dreadex.

This particular demon seems to be one of Dr. Boom's porters during their trip to Dragonblight, judging by the explosives and machinery in his backpack.