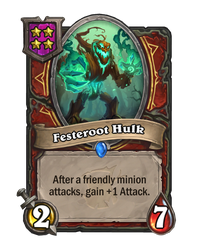 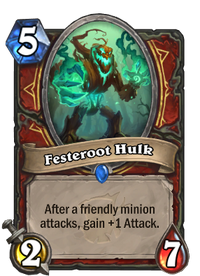 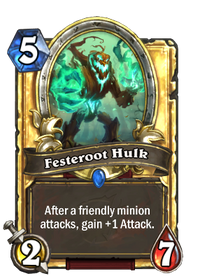 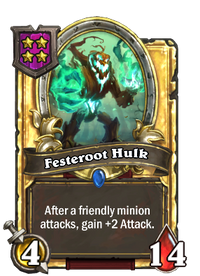 Festeroot Hulk was a Tier 4 minion in the Battlegrounds game mode.

Festeroot Hulk was a relatively large minion for a tier 4 minion and one that scaled as a battle progresses, as such it should be placed on the right side of your board. Adding token-generating minions like Imp Gang Boss and Replicating Menace gave it more chances to increase its attack.

In most cases, Festeroot Hulk's potential was starkly limited compared to other scaling minions such as Scavenging Hyena and Junkbot since Festeroot Hulk not only lacked tribal synergies, but gained attack considerably more slowly, not to mention that it did not gain any health at all. Festeroot Hulk should only be purchased if you were not offered any minions that complement your strategy and just need a large minion to fill a slot on your board, as the game progressed this was normally quickly replaced.

On the other hand, this minion became a priority if you were playing as Tirion Fordring, whose hero power provided a reliable way to considerably improve this minion's already decent stats. Additionally, for the reasons previously stated, most other players didn't contest this minion so you had higher chances of collecting triples. It was a good idea to try for tier 5 before purchasing a third Festeroot Hulk in order to obtain Zapp Slywick, another key minion for a Tirion player.