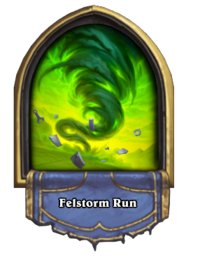 It's a race to the Black Temple through the fury of a felstorm!

Felstorm Run is the third boss encounter in Chapter 2: To the Black Temple of Trial by Felfire Story.

The player controls Stolen Demolisher - a party of outcasts lead by Aranna Starseeker, armed with the Broken Demolisher they repaired from the previous encounter. 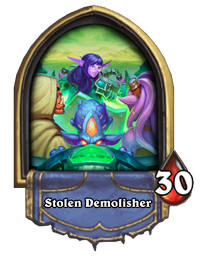 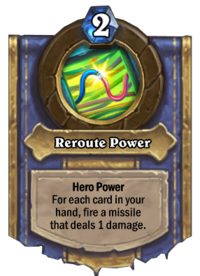 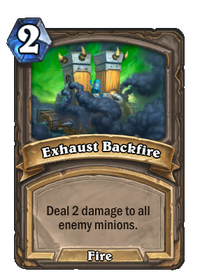 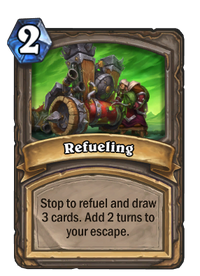 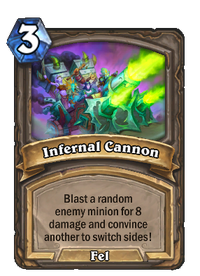 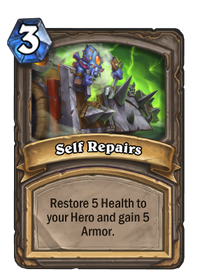 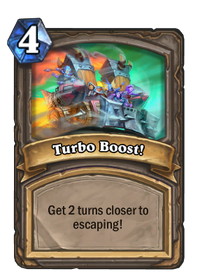 As our heroes ride for the Black Temple, a rusted Felstorm tests their mettle. Survive 10 turns to escape its grasp, and prepare yourself for the next task!

All rhymes aside, the Felstorm Run operates similarly to past escape encounters (such as Mine Cart Rush or The Dragonflights). Riding off on a Stolen Demolisher, you're provided with a special deck of cards and a unique Hero Power. Each turn, the Felstorm Tornado will recruit waves of random Demon and Outland-themed minions from the boss' deck.

Clearing the board is key. Reroute Power is your primary source of damage—proportionate to the number of cards in your hand—and should be your best bet in the early game; play as few cards as possible to maximise damage. As there are only 6 Taunt minions in your deck, you would want to use them sparingly and only to mitigate attacks from incoming enemies. The boss generally goes face whenever possible.

Refueling should be best used to keep your hand filled, for the purpose of using your Hero Power. Despite adding 2 more to the "Turns to Escape" counter, it allows for more options and you have a chance of drawing extra Turbo Boosts!, which counteracts the turn loss. Use at your own discretion.

Exhaust Backfire does good AoE damage against multiple enemy minions, but should be held onto until absolutely necessary. It's especially powerful if the boss has a Mo'arg Artificer on their board. (Two is even better.)

Infernal Cannon should be reserved for situations when there are big enemy minions on the board, ensuring powerful single-target removal and stealing strong enemy minions. Scrapyard Colossus is the most ideal minion to be stolen.

Turbo Boost! is your most crucial card, and should be saved towards the end of the run. Apart from counteracting extra turns from Refueling, using it can end the encounter immediately if you have one or two turns left to escape.

Illidan Stormrage
Through fire and fel our heroes race. While the rusted swarm gives chase.

Aranna Starseeker
Alright, what if I do this?
Gotta keep moving... let me try this!
If I put the red wire to the blue wire... oh!
Just... connect everything!

Aranna Starseeker
Ah, a smokescreen. That might work in our favor.
Did that... break anything?
(cough) Well, that works.

Aranna Starseeker
Let's try fixing this...
The storm's taking a toll - let's fix it up!
Aranna
Sklibb, see if you can fix that. Be careful!
Sklibb, Outcast
<Worried chirping>

Aranna Starseeker
Rusted Legion are coming out of the storm! Get ready to fight!

Baduu, Outcast
Not long now. We're drawing up on the Black Temple.

Karnuk, Outcast
The skies darken... what is this place?

The Felstorm was a gigantic swirl of fel situated above the Tomb of Sargeras. In reality an enormous portal leading to the world of Argus, it was powered by a powerful source of magic beneath the Tomb that Gul'dan released, marking the beginning of the third invasion of the Burning Legion.
The core of the Felstorm is Felstorm's Breach. It shoots through The Guardian's Sanctum and the Conclave of Torment before being channeled to the apex of the Tomb, just above the Sacristy of Elune.