The Felfire Festival (also The Felfire Festival of Music and VENGEANCE) is a Hearthstone event lasting from June 9 to July 7th, 2020. Based on previous years' Midsummer Fire Festival, the Felfire Festival completes the story of Ashes of Outland by introducing the Trial by Felfire solo missions. It also added legendary quests, themed tavern brawls, a new demon hunter hero; Aranna Starseeker, and permanently introduced Pirates and other additions to the Battlegrounds.

On June 9th, 17 new minions including the new Pirate tribe were introduced to Battlegrounds. Alongside them, three new heroes Captain Eudora, Captain Hooktusk, and Skycap'n Kragg as well as the reworked Patches the Pirate were added.

Additionally, Battlegrounds was updated to accommodate for the new tribe. Now, only five of the six tribes will be present in any game to ensure players can access whatever minions they need more easily. 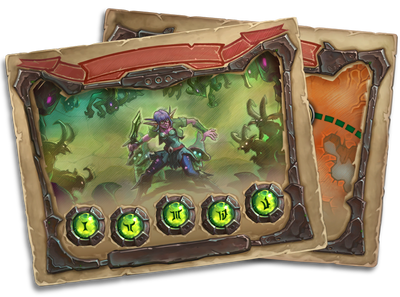 On June 17th, the free Trial by Felfire story missions were released, completing the story of Ashes of Outland. It also opened the Felfire Festival Bundle and the alternate hero Aranna Starseeker for purchase. Additionally, Aranna was added as another new hero to Battlegrounds. From the official site[1]:

Follow the story of Aranna Starseeker on a journey of self-exploration, taking up arms with the Demon Hunters and teaming up with Illidan to take on the twisted architect of the rusted legion itself: MECHA-JARAXXUS!

The story adventure is pretty epic. Like, it made us cry when we did the first rehearsal. Anyway, if you beat it, you’ll get the Rusted Legion Card Back! WICKED!!

On June 24th, the Challenge mode for Trial by Felfire opened. It pits players against some of Outland's toughest bosses, and completing it unlocks a Golden Kael'thas Sunstrider.

The Burndown returns, with a new set of cards - and a twist! Play against opponents with a randomized deck, and the loser takes the winner's deck. Players receive random passive treasures and super-powerful boss hero powers. The best decks spread, and the greatest deck wins the Burndown.

A brand new tavern brawl where players take the role of a boss and equip powerful weapons at the start of the game.

The Felfire Festival featured several legendary quests that rewarded card packs from some of the current Standard card sets. A new quest was unlocked once a week for the duration of the event, with the exception of the first week.