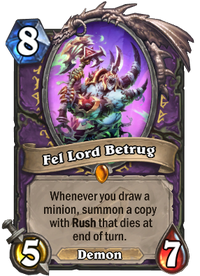 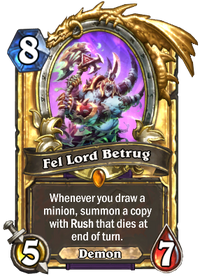 Whenever you draw a minion, summon a copy with Rush that dies at end of turn.

Nobody else likes rush hour.

Fel Lord Betrug is a legendary warlock minion card, from the Rise of Shadows set.

Fel Lord Betrug can be obtained through Rise of Shadows card packs, through crafting, or as an Arena reward.

Fel Lord Betrug has a comparable effect to Dollmaster Dorian, but his effect is geared more towards immediate board control than exploiting triggered and end-of-turn effects. Because the copies of drawn minions die at the end of turn, it's best used to activate expensive Deathrattle effects like Mechanical Whelp, Deranged Doctor, Dr. Morrigan, and Hakkar, the Soulflayer. Charge minions like Leeroy Jenkins are also viable options.

Combos best with Plot Twist, which lets you draw as much card as your hand size, increasing the odds of drawing a minion.

His rather high mana cost can be bypassed by using Skull of the Man'ari or Voidcaller.

Fel Lord Betrug is a fel lord of the Burning Legion and one of the possible end bosses of the Assault on Violet Hold, a dungeon in which the Legion attempts to launch an invasion of Dalaran from within the prison complex known as the Violet Hold.

Fel lords are a type of large and powerful mo'arg demons in service of the Burning Legion. Towering over their lesser minions, they often wield massive, yet slow weapons. Speculated by some scholars of the Legion to be an evolved version of the common felguard, fel lords serve as enforcers in the direct service of Archimonde. Their cruelty is matched only by their brute force.

From Fel Lord Betrug's World of Warcraft Adventure Guide entry
This ruthless Legion commander stands ready to lead an invasion of Dalaran from within its walls.