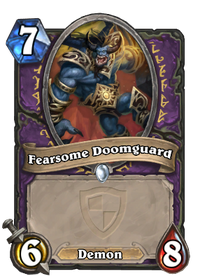 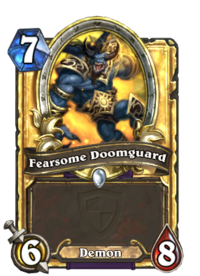 They were originally called Cuddleguards, but they were not inspiring the proper amount of fear.

Fearsome Doomguard is a common warlock minion card, from the Grand Tournament set.

Fearsome Doomguard can be obtained through The Grand Tournament card packs, or through crafting.

Since it has no special effect, this card compensates by having strong stats. Being a Demon, it can also cooperate with Voidcaller's deathrattle to quickly gain board presence. In any case, it is a powerful addition to Demon-based decks.

For decks simply looking for the raw stats, Bog Creeper is an effective alternative, having Taunt in exchange for lacking the Demon tag.

Summon
Doom for everyone! Hahaha!

Attack
Doom for you!

Death
Doom for me.

The doomguard, or doom guard, are a type of demonic warrior of the ered'ruin species that used to work as Archimonde's personal escort, and continue to serve the Burning Legion with great fervor.