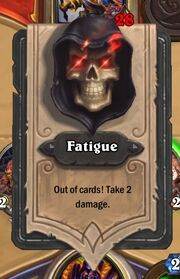 The message displayed upon attempting to draw a card after reaching Fatigue.

Fatigue is a game mechanic that deals increasing damage to players who have already drawn all of the cards in their deck, whenever they attempt to draw another card.

Each player starts the game with a full deck of 30 cards. All cards drawn are drawn from that deck, slowly depleting its supply of cards. The player's hero will announce when the deck has only one card left, and again once the deck is fully exhausted.

Once a player has exhausted their deck, trying to draw a further card will cause Fatigue, dealing damage to the hero. This includes cards automatically drawn at the start of your turn, and cards specifically drawn as a result of other card draw effects. Fatigue takes effect each time a card is attempted to be drawn.

Fatigue only deals damage when the attempt to draw a card fails. If the player restocks their deck, such as through shuffle into deck effects, the player will not suffer fatigue when then successfully drawing a card.[1][2] However, Fatigue never resets.[3] This means that even if the player restocks their deck, or successfully draws cards, the next time they fail to draw a card, Fatigue will pick up where it left off, dealing 1 more damage than it did the last time.

Because Fatigue is caused by the attempt to draw a card, not the movement of the card itself, similar effects such as put into hand effects, put into battlefield effects, discard effects and remove from deck effects will not trigger Fatigue.

Some control decks may employ Fatigue damage as a secondary or even primary means of winning games. Mage decks excel at this approach, thanks to multiple board-wide Freeze effects, delaying secrets like Ice Block, and a large range of removal spells. Players can also force the opponent to overdraw through effects such as Acolyte of Pain and Coldlight Oracle, while keeping their own card draw low. Effects like Alexstrasza's Battlecry can be useful for late damage when having focused on stalling until that point, allowing Fatigue to push the opponent over the edge.