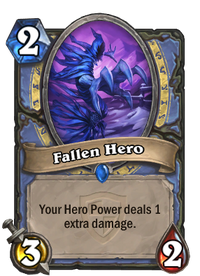 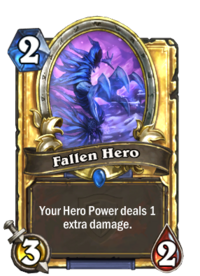 And he can't get up.

Fallen Hero is a rare mage minion card, from the Grand Tournament set.

Fallen Hero can be obtained through The Grand Tournament card packs, or through crafting.

Fallen Hero (Core) is uncraftable and cannot be crafted or disenchanted.

This card is very useful for increasing the mana efficiency of the mage's Hero Power. As long as it is on the battlefield, your enemy will have a hard time building a board in the early game. Has great synergy with Coldarra Drake for late game and also with Duplicate and Echo of Medivh for increasing the effect even more through the multiple copies these cards provide.

Summon
Finally, a second chance!
Attack
Your turn to fall!

The Fallen Hero mirrors the Fallen Hero's Spirits from Icecrown. They are the spirits of Horde and Alliance heroes who killed each other over the Broken Front. When a group of Horde patrolled the land, they found the Alliance battling the Scourge. Deciding to take the opportunity, they attacked the Alliance from behind. However, their Backstab would be for nothing as all three groups suffered defeat. Forces of the Scourge came soon after to start raising them into undead.