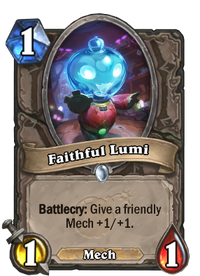 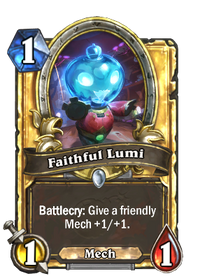 They're a little light-headed.

Faithful Lumi is a common neutral minion card, from The Boomsday Project set.

Faithful Lumi can be obtained through The Boomsday Project card packs, or through crafting.

A decent buff for Mechs, although not as flexible as Magnetic. Over Magnetic minions, it has the advantage of placing an extra body on the board.

Being a 1-cost Mech, Faithful Lumi can be used to make very powerful boards in the early-game when combined with Galvanizer (Or Mechwarper in the Wild format) and other low-cost Mechs.

Lumis are unique to Hearthstone. There are thousands of them running around Boom Labs, helping the other Mechs, and acting as Dr. Boom's little assistants.[1]