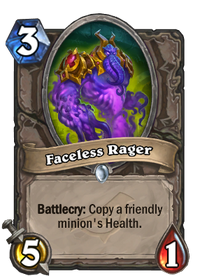 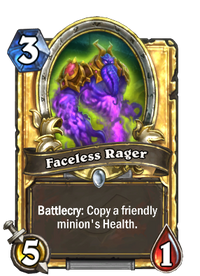 When you need to rage anonymously.

Faceless Rager is a common neutral minion card, from the Rise of Shadows set.

Faceless Rager can be obtained through Rise of Shadows card packs, through crafting, or as an Arena reward.

Unlike most Rager cards, Faceless Rager has a very powerful effect. By gaining a large amount of health, this minion can make great use of its 5 attack. With only a 3 health minion on the field, this card is already above its cost. At anything more, it's a powerhouse minion for only 3 mana.

In an absolute emergency, you can play Faceless Rager on an empty board and threaten your opponent with 5 damage, the same as you would Magma Rager.

This card works well in Silence Priest, where it can copy huge minions like Ancient Watcher and Arcane Watcher potentially very early. It also acts as a pseudo-activator for those cards, putting their high stats to good use even without affecting the minions themselves.

Faceless Rager appears to be an unusual variation of faceless one, with an incorporeal lower body.