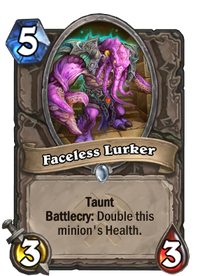 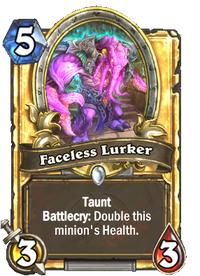 Faceless Lurker is a common neutral minion card, from the Saviors of Uldum set.

Faceless Lurker can be obtained through Saviors of Uldum card packs, through crafting, or as an Arena reward.

This card is meant to be played in combination with cards that buff minions in your hand. With a bit of a boost from Into the Fray or Armagedillo, it will have enough Health to ward off almost anything for a relatively low cost. It also benefits decently from effects that double your Battlecry (Ex. Heart of Vir'naal), creating a 3/12 Taunt minion; comparable to Witchwood Grizzly, but without requiring working around its Battlecry.

Another way to use this minion is either using Inner Fire to make it a 6/6 for total of 6 mana or Kooky Chemist, Crazed Alchemist, Void Ripper to flip it to have double attack instead.

Faceless Lurkers are faceless ones that roam Naz'anak: The Forgotten Depths, a cave deep beneath Icecrown Citadel.