Eye of the Storm

From Hearthstone Wiki
Jump to: navigation, search
Eye of the Storm
Regular 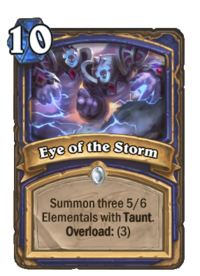 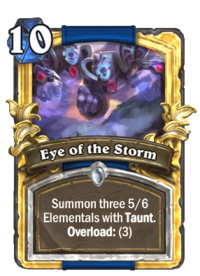 If that's the eye, I would hate to see the rest of the storm.

Eye of the Storm is a common shaman spell card, from the Galakrond's Awakening set.

Two copies of regular Eye of the Storm are obtained by defeating Chenvaala in Galakrond's Awakening's Chapter 1 of E.V.I.L. campaign. 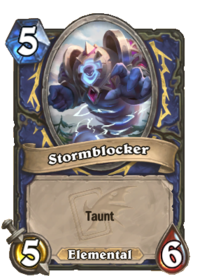 If you are looking for a good way to immediately shift tempo in the late-game, this can be a very powerful card. If you have an Archmage Vargoth in play, Eye of the Storm will double its effect. It can also be combo'd with Electra Stormsurge if you drew one of the cards from Far Sight. This spell also works very well with The Fist of Ra-den, summoning a 10 mana Legendary alongside the 5/6 minions. It's also one of the best spells to play using The Runespear.

Since the summoned Stormblockers are Elementals, they can synergize with Elemental effects to an extent - they were not played last turn, hence can't trigger effects like Elementary Reaction, but can be used with Earthen Might and Cauldron Elemental.