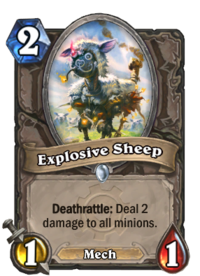 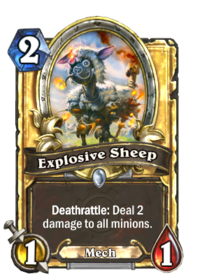 Deathrattle: Deal 2 damage to all minions.

How is this supposed to work? Your enemies think, "Hey! Cute sheep!" and run over to cuddle it?

Explosive Sheep is a common neutral minion card, from the Goblins vs Gnomes set.

Explosive Sheep can be obtained through Goblins vs Gnomes card packs bought through the ingame Shop, purchased online from the Battle.net shop, or through crafting.

Ideal for mages, who can use Fireblast to trigger the effect. Very useful as part of a control deck, allowing the mage to summon and then immediately destroy the sheep, providing a 2 damage AoE for 4 mana and only 1 card. The Explosive Sheep can also be combined with other effects such as Unstable Ghoul, Abomination and Boom Bots for a chain reaction of AoE or random target damage.

Punishes your opponent for playing AoE removal cards, similar to Abomination. Can be granted Taunt by effects such as Defender of Argus in order to force the opponent to deal with it.

Equality then attack with Explosive Sheep for full board clear. Also serves as a good 4 damage full-board AoE in combination with Feign Death. The Feign Death will activate the Sheep's Deathrattle, dealing 2 damage to all minions; the Explosive Sheep will then be destroyed (unless buffed), leading its Deathrattle to trigger again, for a total of 4 damage to all minions.

Its Deathrattle can work with Undertaker or Baron Rivendare, but be wary of the damage your minions will suffer.

If you suspect your opponent has Mirror Entity active, playing and destroying the sheep is a good way of dealing with the Secret and delivering a surprise 4 damage AoE.

It is perhaps the goblins’ delicious — most other races say “dangerous” — sense of humor that gets them into the most trouble. Bring up the exploding sheep incident of the war against the Burning Legion in any tavern in Booty Bay and the goblins there roar with laughter and buy you a drink, each desiring to tell his or her own version of the story.

The tales differ, but most agree that after the Burning Legion had invaded the plague-ridden Lordaeron, most people were dead, undead or fled. One, a goblin tinker merchant traveling through the town, started making mechanical animals to distract any Burning Legion demons so that he could make his slow and panicked way south. One of these devices was cobbled together from wool, wood and some primitive clockwork. On a whim, he decided to fill it full of explosives and have it totter towards the demons. When it exploded, he decided, he would flee in the chaos that followed.

He didn’t expect a demon, a dim-witted felguard, to pick up the sheep and inspect it. He damned himself for outfitting it with a timer and not a remote, but he nearly squealed with glee with the curious demon popped the treat into its mouth. The resulting explosion of demon parts was definitely enough for the tinker to get away, laughing so hard he nearly gave himself away.

Now the mechanical sheep has a bit more thought — and a lot more explosives — put into it. The goblins mainly make them to amuse themselves, giving their enemies a moment of confusion before death, but they are powerful explosives in their own right. 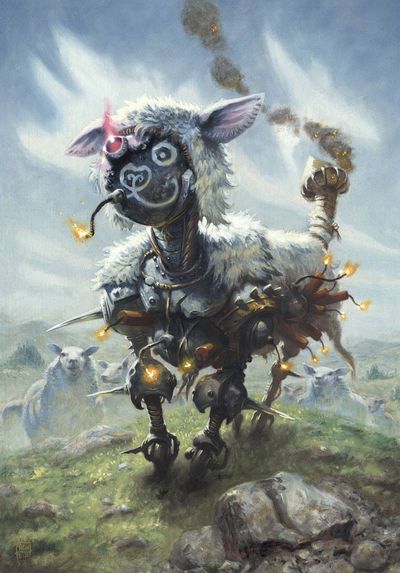