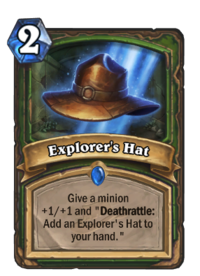 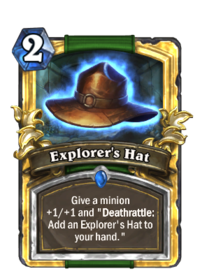 Give a minion +1/+1 and "Deathrattle: Add an Explorer's Hat to your hand."

Harrison Jones was disappointed that he didn't get to be part of the League of Explorers, but his hat did.

Explorer's Hat is a rare hunter spell card, from the League of Explorers set.

Two copies of regular Explorer's Hat are granted to the player automatically upon purchasing the first wing of the The League of Explorers adventure.

As a Wild format card, both regular and golden versions of Explorer's Hat can also be crafted for the following amounts:

Can combo well with Lock and Load and Baron Rivendare in order to get more cards and Hats. If your opponent has Baron Rivendare, or any low Health minion, you can potentially fill their hand with Hats, as you can grant this Deathrattle to enemy minions.

This hat belongs to Harrison Jones.[1] Since Harrison is generally quite adept at keeping possession of his hat, it's not known how it ends up coming into the player's possession. 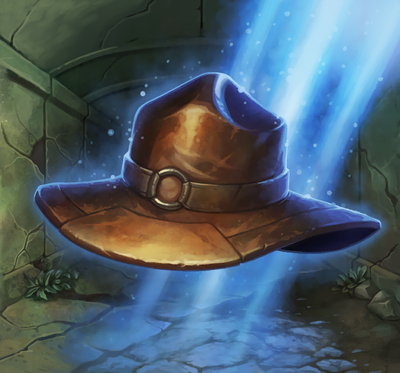