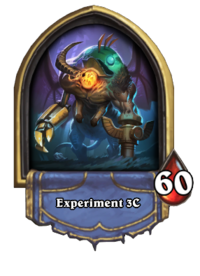 Experiment 3C is a boss that can be encountered during the Monster Hunt. 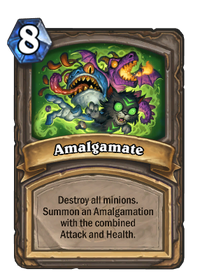 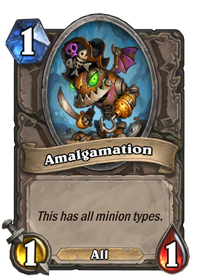 Do not flood the board if you don't have removals in your hand or deck. Amalgamate will not only destroy all of them, but also combine all their stats into his own minion. He can buff it consistently as it has all stats.

The more you rely on your cannons, the more you increase your chances of winning. Cautiously use your Rush minions to clear the board.

While building a board is great, make sure you don't leave too many minions when he uses Amalgamate.

For Toki, you have choice between rushing him down before he uses Amalgamate or play slowly. The former, however, is extremely risky, as it is virtually hopeless once he plays Amalgamate.

One strategy can be using Scepter of Summoning to play big minions such as The Lich King on turn 5, so that you can rush the enemy before turn 8 when he will play Amalgamate. In the earlier game, it can help getting Double Time treasure, so that you can get and play strong minions through double time Unstable Portal.

As long as you have a removal, Amalgamate will be a piece of cake. Otherwise, rush the boss down.

Hagatha the Witch
Hmmm... That isn't one of mine.

Experiment 3C
Nice to bleat you.

Experiment 3C
(burps) Excuse me, I do that sometimes.

Experiment 3C
You were... not my target.

Experiment 3C is original to Hearthstone. It is an amalgamation, a creature of many formed into one entity, created in Dr. Boom's labs. It has escaped and now roams the Witchwood.