Expansions are major card set additions to the game of Hearthstone. Expansions introduce the majority of collectible cards into the game, with each expansion introducing around 130-145 new cards. These cards, referred to as expansion cards, are used primarily to create and build decks to play in Casual or Ranked mode, in either the Standard or Wild game format modes. These expansion cards are obtained chiefly through purchasing and opening card packs, through crafting, or through earning Arena rewards.

In early 2017, the developers announced their plans to release three expansions each year, with each expansion featuring around 130 new cards, abandoning their previous annual release cycle of expansion-adventure-expansion.[1] Starting with Knights of the Frozen Throne in August 2017, expansions also featured optional solo-player content in the form of Missions, effectively integrating an adventure into each expansion.[1]

Hearthstone's first expansion was Goblins vs Gnomes, released in December 2014.

The following is a table of all card sets, featuring all collectible cards in the game. This includes all expansions and adventures, the core sets of Basic and Classic, and the Hall of Fame set.

For the full table with legend and notes, see: Card set table.

The following is the card set release calendar for all expansions and adventures. The highlighted sets are in Standard format.

Rise of Shadows is Hearthstone's eleventh expansion, released on April 9, 2019. Featuring 136 new collectible cards, the The Dalaran Heist single-player content, and the new priest alternate hero Madame Lazul, the expansion introduces the Twinspell keyword. Five of the villains of Hearthstone's previous expansions band together to form the League of E.V.I.L., devising a scheme to take over the magical floating city of Dalaran.

Saviors of Uldum is Hearthstone's twelfth expansion, released on August 6, 2019. Featuring 135 new collectible cards, the Tombs of Terror single-player content, and the new druid alternate hero Elise Starseeker, expansion introduces the Reborn keyword. The set also reintroduces quest cards again as we know it from Journey to Un'Goro. Following the events of Rise of Shadows, the League of E.V.I.L. successfully steals the city of Dalaran and takes it to Uldum, but the League of Explorers steps in to foil Rafaam's plan.

Descent of Dragons is Hearthstone's thirteenth expansion, released on December 10, 2019. Featuring 140 new collectible cards, and the new warrior alternate hero Deathwing, expansion introduces the Invoke keyword and Sidequest cards. The League of E.V.I.L. travels to Dragonblight to fulfill their ultimate plan: reawaken Galakrond, the primeval dragon. The League of Explorers and the League of E.V.I.L. face off once again, with the fate of the world at stake. 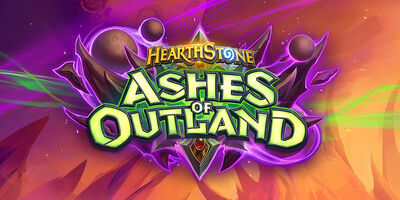 Ashes of Outland is Hearthstone's fourteenth expansion, featuring 135 new collectible cards and the alternate shaman hero Lady Vashj. The expansion was released on April 7, 2020. Like the previous expansions, this one also includes Trial by Felfire, a free single-player content, where Aranna Starseeker must stop the Rusted Legion.

Ashes of Outland also featured Hearthstone's first new class, the Demon Hunter. The expansion did not introduce any new keywords directly. However, the Demon Hunter class uses its own special keyword; Outcast, which has an effect if the card is played from the left or right-most spot in the hand. Meanwhile, one of the old abilities, Dormant, was keyworded. 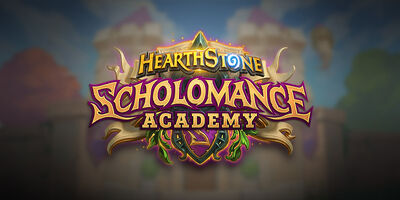 Set in the magical school of Scholomance, run by headmaster Kel'Thuzad at a time before he became an evil lich, the expansion sees aspiring young champions of every class studying in this prestigious academy. However, beneath the halls of Scholomance lies a secret, evil cult. Scholomance Academy introduced the new Spellburst keyword, an effect that triggers the first time you cast a spell with the minion on board. It also added dual-class cards, double majors that can be used by either class and combine themes and mechanics from each other.

Goblins vs Gnomes (often abbreviated as GvG) was the first expansion for Hearthstone: Heroes of Warcraft. The second infusion of new cards to be added to the game, after Naxxramas , the expansion features 143 new cards (123 of which are collectible), with a strong mechanical theme, and introduced the Mech minion type, as well as debuting the long-awaited spectator mode. The expansion was debuted in an arena-only launch event on December 4th, 2014, with the full launch taking place on December 8th/9th/10th.

The Grand Tournament is Hearthstone's second expansion, launched August 24th, 2015. With more than 130 new cards, the expansion features a strong theme of Hero Power-related effects, as well as seeing the introduction of the first full new keyword since the game's release - Inspire - allowing minions to grant special effects each time the player uses their Hero Power. It also introduced a new non-keyword mechanic, Joust.

Whispers of the Old Gods[edit]

Whispers of the Old Gods is Hearthstone's third expansion, launched April 26th, 2016. Featuring 134 new collectible cards, this sinister expansion revolves around the dark influence of the Old Gods, ancient and unspeakably evil creatures that have long lain hidden, imprisoned in the dark places of the world millennia ago. Despite their imprisonment, these shadowy beings' influence can be felt in every corner of Azeroth, twisting and corrupting any who hear their maddening whispers. With an army of followers performing forbidden empowerment rituals, the tentacles of these massive horrors are growing rapidly toward the light, eager to bring their own kind of excitement to the sunlit kingdoms and merry taverns of Azeroth.

Released December 1, 2016, Hearthstone's fourth expansion, Mean Streets of Gadgetzan, features 132 new collectible cards. Set in the bustling, lawless port city of Gadgetzan, the expansion features characters from the city's three ruling crime families - the brutish Grimy Goons, the assassins of the Jade Lotus, and the shadowy spellcasters of the Kabal. With their own minions, spells and weapons, each family is formed from an allegiance of three different Hearthstone classes, resulting in multi-class cards, usable by heroes of any of those three classes. 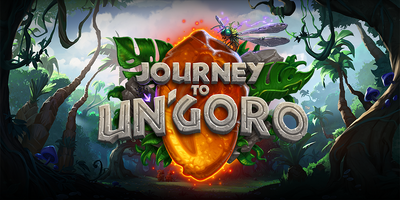 Journey to Un'Goro is the fifth expansion to Hearthstone, featuring 135 collectible cards. The expansion was released on April 6, 2017 in the Americas region, and April 7, 2017 in the Europe and Asia regions. The expansion features the new Adapt mechanic, the new Quest card type, and adds the new Elemental minion type. Set in the primordial mists of Un'Goro Crater, the expansion sees Elise Starseeker leading an expedition to explore the strange wonders of the region. The denizens of the region include dinosaurs, raging elementals and unusually active plants, many of whom have learned to adapt to the needs of the situation with impressive new powers.

Knights of the Frozen Throne[edit]

Released August 10th, 2017, Knights of the Frozen Throne is the sixth expansion to Hearthstone, featuring 135 collectible cards. Set in the frozen wastes of Northrend, the expansions sees each of the nine classic heroes of Warcraft fall under the sway of the Lich King, becoming undead death knights in his service. The expansion features the introduction of a new card type in the form of the hero card, which replaces the player's hero portrait and Hero Power, as well as the Lifesteal keyword. Knights of the Frozen Throne is also the first expansion to feature a new type of free, optional single-player content in the form of Missions, which take the player through the halls of Icecrown and rewards card packs and a random Legendary hero card.

Kobolds & Catacombs is the seventh expansion to Hearthstone. It was released on December 7, 2017 and is the final expansion in the Year of the Mammoth. This set consists of 135 collectible cards, along with the new Recruit keyword, Legendary weapons for all classes, and offers the new Solo Adventures option of Dungeon Run. Hearkening back to the roots of classic fantasy and dungeon crawlers, the expansion sees players venturing deep into dark dungeons and winding catacombs in search of treasure and loot, encountering monsters, traps, rival adventurers, and — above all — slovenly, candle-obsessed kobolds along the way.

The Witchwood is the eighth expansion to Hearthstone. It was released on April 12, 2018 and is the first expansion in the Year of the Raven. This set consists of 135 collectible cards, featuring three new keywords: Start of Game, Echo, and Rush. It also added a new game mode called Monster Hunt, a single-player mode akin to Dungeon Run that features four exclusive playable classes. The expansion also celebrated the release of Lunara, a new druid alternate hero. The release of The Witchwood ended the previous Standard year, the Year of the Mammoth. Set in the worgen kingdom of Gilneas, its citizens band together to fight the evil witch Hagatha who has corrupted the neighboring forest. The Witchwood expansion is the first one in which two minions, Baku the Mooneater and Genn Greymane, rotated out of standard after one year instead of two.

The Boomsday Project is Hearthstone's ninth expansion, released on August 7, 2018. Featuring 136 new collectible cards, the Puzzle Lab single-player content, and the new warlock alternate hero Mecha-Jaraxxus, the expansion introduces the Magnetic keyword, Legendary spells for all nine classes, and themed "Project" and "Omega" cards. Set in the shattered, otherworldly region of the Netherstorm in Outland, the science-themed expansion is centered around the famous Dr. Boom and his team of elite scientists at Boom Labs working on a mysterious top-secret project, unleashing all manner of strange experiments along the way.

Expansion cards are cards added to the game through expansions, or the game's original release, rather than through adventures or other means.

All Standard format expansion cards are obtainable through card packs, through crafting, or as Arena rewards. Standard expansion cards may also be found in the Highest Rank Bonus chest at the end of each Ranked season.

When the first new expansion is released each year, all card sets that weren't released in the same year or the year prior are removed from Standard format. Cards from these removed sets are termed Wild cards and can only be used in Wild format matches. For details on how the Standard format year works, see The Standard year.

Starting in 2014, only a few months after the game's release, Hearthstone presented two different forms of content: adventures and expansions. The former featured a small number of cards and a substantial solo experience, with special bosses and challenges; while expansions brought far larger amounts of cards, but without solo content of any kind. Additionally, while adventures' cards were earned through defeating bosses, expansions' cards were earned through regular means such as crafting and card packs.

Despite these differences, in more general parlance, adventures can be considered equivalent to expansions in other games, with substantial changes to the game's basic play experience that far exceed the impact of a regular patch. For example, Curse of Naxxramas, the game's first adventure, is commonly considered its first 'expansion'.

Between the release of the game in March 2014 and the start of the Year of the Mammoth in spring 2017, Hearthstone saw an alternating pattern of adventures and expansions. However, in early 2017 the developers announced plans to integrate future adventure content into expansions. Starting with the second expansion of 2017, each release will feature optional single-player missions, themed around the expansion and serving to illustrate its story, setting and characters. These missions will be free of charge, but may not award cards in the same way or numbers in which adventures have until now. Further details will be announced later in the year. 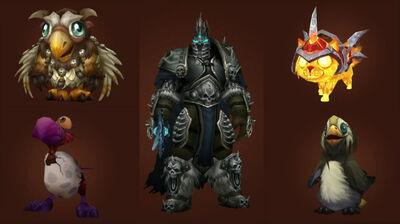 "Only YOU can decide who will be the victor in this epic conflict."

"There was another idea out there... well actually it wasn't really an idea out there, but I was kinda wishing it would have been [...] because it's one that I think would be super awesome, is the idea that maybe we could do something like, you know, "THE LICH KING... VS... BATTLE PETS" [...] of course I've only put that up there to have a little fun with it, but on the other hand as I've been looking at it and thinking about it, it... it's starting to grow on me, actually..."[7]