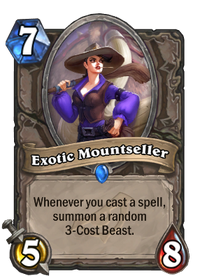 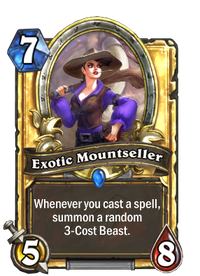 Whenever you cast a spell, summon a random 3-Cost Beast.

*Taps roof of mammoth* "You can fit so many squirrels in this thing!"

Exotic Mountseller is a rare neutral minion card, from the Rise of Shadows set.

While not currently a fit for most decks, being a bit late game for Spell-heavy Hunter decks, and few other archetypes having a specific use for cheap Beasts beyond placing bodies on the board, Exotic Mountseller has a very high swarming potential if played with cheap spells or spells with cost reduction. Worth noting, Exotic Mountseller can summon Hunter minions such as Bearshark, and the 3 Mana Beast pool is perhaps disproportionately valuable for its Mana cost due to the early game power of Beasts as an archetype.

One combination that would be possible on the same turn as playing Exotic Mountseller would be to play Rapid Fire twice, especially in combination with any sources of Spell Damage already in play, to either clean up weakened enemy minions or push for lethal, while setting up an additional 6 Mana worth of threats that can be either buffed or used to clean up Taunts played in response.

If Exotic Mountseller survives yet another turn, she can fill the board even more effectively with what are essentially token bodies if played alongside Unleash the Beast.

Exotic Mountseller can generate a lot of extra value when played with spells that have their cost reduced. A Paladin's Librams or a Druid's Bogbeam and Ironbark can be played alongside Exotic Mountseller on the same turn to generate value without having to leave her on the board for a turn.

Generally, her best value either comes as a reasonably-statted body that adds value to Spells that would already have been played, or as a way to distract your opponent's board and sap their answers in hand to new minions filling the field.

In decks running swarm-type buffs such as Bloodlust, this can become even more meaningful.

The below table lists all 3-Cost collectible Beasts in Standard format, representing the range of possible minions summoned by Exotic Mountseller.

Summon
I supply only the finest creatures.
Attack
Wrangle this!

The Exotic Mountseller is a reference to Mei Francis, a vendor in Dalaran that sells unique mounts.