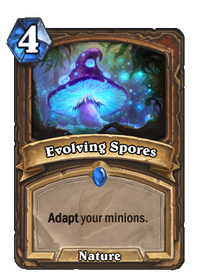 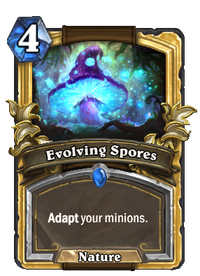 The most powerful mushrooms are commonly found in boxes marked with "?".

Evolving Spores is a rare druid spell card, from the Journey to Un'Goro set.

Evolving Spores can be obtained through Journey to Un'Goro card packs, or through crafting.

Evolving Spores can be an extremely powerful card when played on a full board. Enchantments like Rocky Carapace, Shrouding Mist, or Crackling Shield make it very hard for your opponent to deal with the board. More agressive adaptations such as Flaming Claws, Lightning Speed, or Poison Spit are especially useful when several of your minions can attack on the same turn, as they can do devestating damage to your opponent's board, or hero.

When playing against a druid that you expect to play Evolving Spores, always kill off all his minions on every turn, and try to keep a board clear in your hand in the late game when they could potentially play some cheap minions and immediately adapt them.