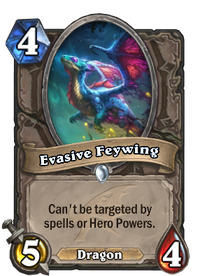 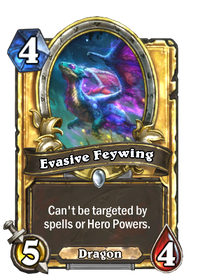 I've never heard of this fey-dragon called "Brightwing," but if I HAD, I’d say we’d be best friends.

Evasive Feywing is a common neutral minion card, from the Descent of Dragons set.

Evasive Feywing can be obtained through Descent of Dragons card packs, through crafting, or as an Arena reward.

This card is essentially a larger and more threatening Faerie Dragon. Unlike it's smaller sibling, an enemy player is far less likely to be able to ignore a 5-attack minion. Classes that rely on spells more like Mages and Rogues will find this minion to be a larger threat than classes like Hunters or Warriors. Regardless, a 4-cost 5/4 is great to play on curve and the fact that the enemy must waste minions trading into it instead of using spells means that it has a higher survival rate than other similarly costed minions.

It is also a good minion to have in Druid decks that have Embiggen and Frizz Kindleroost, boosting it to an evasive 3-cost 7/6.

The Evasive Feywing appears to be a giant Faerie Dragon. It likely represents one of the faerie dragons used by the draenei in the alternate timeline Shadowmoon Valley. How it traveled to Azeroth is unknown, but it may have been brought back by the Alliance once the War in Draenor was over. 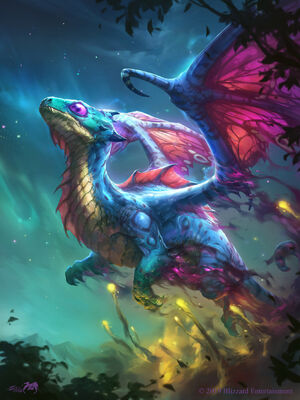