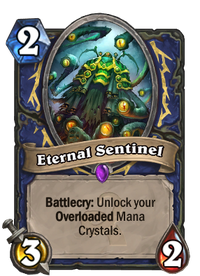 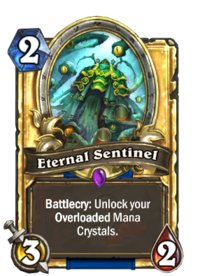 Eternal Sentinel is an epic Shaman minion card, from the Whispers of the Old Gods set.

Eternal Sentinel can be obtained through Whispers of the Old Gods card packs, or through crafting.

A reasonable minion in itself for the cost, this card is valuable for its Battlecry, equivalent to the secondary effect of Lava Shock. This can unlock multiple Overloaded Mana Crystals, effectively lowering the overall mana cost of the Overloading cards, and negating the loss of tempo normally created by playing those cards.

This card can be considered the minion counterpart to Lava Shock. Generally you will prefer Lava Shock as it is faster and fits into the more aggressive Shaman archetypes, however this minion still boasts a good body which can be used in the early game to help with board control. A minion with 3/2 stat distribution is considered premium for a 2-mana card and has a good chance to "trade up" or deal 3 damage to the enemy hero.

A turn 4 Ancestral Knowledge followed by this card into a turn 5 Doomhammer would be quite an ideal scenario, just as one example. Playing it with cards with very large Overload such as Elemental Destruction is also very effective.

With only 2 Overload in place, this minion can be considered a free card, effectively incurring no mana cost. At higher levels of Overload it effectively generates mana for the player, in addition to summoning a useful minion. This makes it an efficient addition to any deck with Overload cards, even if not the primary focus of the deck.

Summon
I can see what is to come.

Attack
You will see.

The Eternal Sentinel appears to be a mutated form of qiraji prophet, similar to the Skeram Cultist.