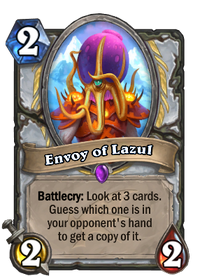 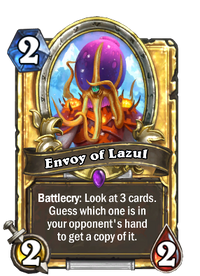 Battlecry: Look at 3 cards. Guess which one is in your opponent's hand to get a copy of it.

"Note to self: possess someone who's local and knows directions next time."

Envoy of Lazul is an epic priest minion card, from the Descent of Dragons set.

Envoy of Lazul is similar to Curious Glimmerroot, only this time you are guessing which card is currently in their hand, as opposed to a card that started in their deck. It is a bit tougher to use, however, as there is almost no way to tell which card is correct, and it mostly boils down to luck.

Even if your guess is not correct, you can gain some knowledge about your opponent's deck, and learn one of the cards that is currently in their hand, allowing you to plan ahead.

Summon
Your head isn't as empty as it looks.

Attack
Not the face!

Envoy of Lazul is a Merciless one currently possessing a host.

Merciless ones, also called zoatroids, are octopus-like cyclopean parasitic aberrations related to the Old Gods, primarily found alongside the naga forces in Vashj'ir. They are capable of attaching themselves to (and/or devouring) the heads of sapient beings in order to enslave them.