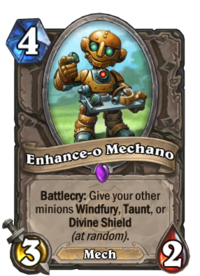 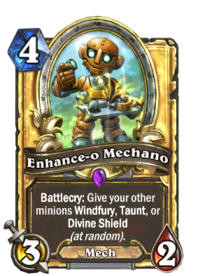 Battlecry: Give your other minions Windfury, Taunt, or Divine Shield. (at random)

His enhancements are gluten free!

Enhance-o Mechano is an epic neutral minion card, from the Goblins vs Gnomes set.

Enhance-o Mechano can be obtained through Goblins vs Gnomes card packs, or through crafting.

The number of buffs granted by this minion is multiplied by each friendly minion on the board, generally making it a more valuable play the more minions you have. This makes it ideal for use in decks that tend to have a large number of minions on the field.

This can be a good panic play when facing imminent lethal damage from minions, by potentially converting several of your minions to Taunts, and/or granting existing Taunts Divine Shield.

On the other hand, its potential for granting Windfury can be very effective for aggressive play, especially with high-Attack minions on the field.

For maximum efficiency, break Divine Shield on any of your minions before playing it.