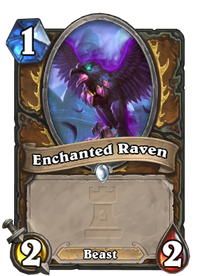 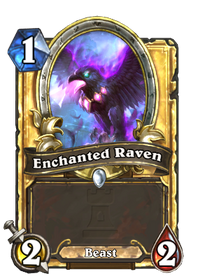 Once upon a midnight restive, Medivh pondered, feeling festive!

Enchanted Raven is a common druid minion card, from the One Night in Karazhan set.

Two copies of regular Enchanted Raven are obtained by defeating An Uninvited Guest in One Night in Karazhan's Prologue.

As a Wild format card, both regular and golden versions of Enchanted Raven can also be crafted for the following amounts:

Enchanted Raven is a solid minion to play on turn 1. Having no special abilities, it compensates by having strong raw stats for only 1 mana, capable of killing or at least trading evenly with most 1-drops and 2-drops. Being a Beast, it also benefits from Druid cards that have Beast synergy. If played on turn one, Mark of Y'Shaarj is a perfect follow-up on turn two.

This apparently magical raven may be intended to represent Medivh in raven form, especially given their matching jewellery (see image below).

Enchanted Raven was originally designed to be a "Plaguebat" and be featured in the Curse of Naxxramas adventure as the Hunter class reward. [1]