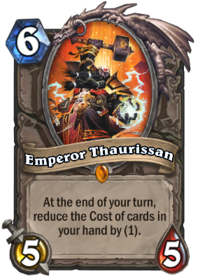 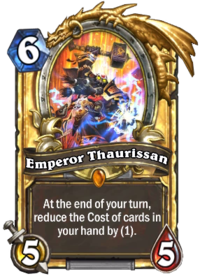 At the end of your turn, reduce the Cost of cards in your hand by (1).

His second greatest regret is summoning an evil Firelord who enslaved his entire people.

Emperor Thaurissan is a legendary neutral minion card, from the Wild Event set.

For information about the original version of this card, see Emperor Thaurissan.

One non-golden copy of Emperor Thaurissan is automatically included in all players' collections during these events:

Both non-golden and golden Emperor Thaurissan are uncraftable and cannot be crafted or disenchanted.