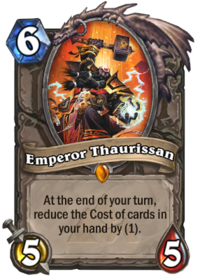 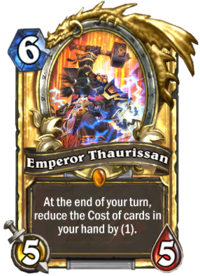 At the end of your turn, reduce the Cost of cards in your hand by (1).

His second greatest regret is summoning an evil Firelord who enslaved his entire people.

Emperor Thaurissan is a legendary neutral minion card, from the Blackrock Mountain set.

As a Wild format card, both regular and golden versions of Emperor Thaurissan can also be crafted for the following amounts:

Thaurissan should be able to find a place in most control decks. Aggro decks will receive less benefit from his ability because they generally have fewer cards in hand. Thaurissan is quite powerful in combo decks that try to do a large amount of damage in a single turn, because he allows you to play more total mana value in a single turn than you otherwise would. For example, when you have Malygos in your hand at the time of reduction, as well as several low-cost spells that can damage your opponent, such as Eviscerate or Frostbolt, you can play the spells on the same turn as Malygos instead of hoping that he survives until your next turn. This is especially useful for Miracle Rogue and Freeze Mage decks, and makes this minion a centerpiece in any deck looking to kill their opponent in one turn.

With 6 or more other cards in your hand, Thaurissan can be expected to effectively refund its own mana cost by reducing the cost of the player's other cards. If Thaurissan is allowed to survive for multiple turns, the advantage will stack, making him even more rewarding.

Compared to other 6-drops in the game like Sylvanas or Cairne Bloodhoof - his effect doesn't have an impact on the board. On the other hand he can give you a huge tempo lead in the following turns. His stats are below average for mana cost, but are made up for by his potentially powerful effect. In a rare combination with Aviana and Thaurissan, it will lead to your minions all being free the next turn, assuming your opponent doesn't kill Aviana the turn you execute this combo.

Summon
By the power of Ragnaros, I have the power!

"Thank you for clearing out those foolish senators. Now prepare to meet your doom at the hands of Ragnaros' most powerful servant."

Emperor Dagran Thaurissan, a descendant of Emperor Thaurissan and Modgud, ruled the Dark Iron clan with a combination of charisma, sorcery and iron will. Even as the leader of his clan, he is, like all Dark Iron dwarves, a servant of Ragnaros. The Emperor rules his people not from the city founded by (and named for) his ancestor, but rather from the depths of Blackrock Mountain near the entrance to Ragnaros's domain, the Molten Core. The Emperor's Dark Irons swarm the depths of Blackrock Mountain, and have also been seen in the Searing Gorge to the north and the Burning Steppes to the south. He has also sent his emissaries and agents to the gnomish capital of Gnomeregan, apparently in an effort to back the self-proclaimed ruler of Gnomeregan, Sicco Thermaplugg.

The Emperor kidnapped King Magni Bronzebeard's daughter, Princess Moira Bronzebeard, and treated her with the respect due her position, and even kindness and affection. Moira soon fell in love with him, marrying him. She is now pregnant with his child, who is half Bronzebeard dwarf and half Dark Iron dwarf, and the heir to both thrones of Shadowforge and Ironforge.

It is revealed in The Shattering: Prelude to Cataclysm that King Magni Bronzebeard sent a team to kill Emperor Thaurissan, and retrieve the previously thought to be ensorcelled Moira back to Ironforge. Yet Moira refused to come home and announced that she was pregnant, and that the death of her husband has left a terrible, fiery rage within her heart.

Dagran currently wields the legendary hammer Ironfoe, but not by legitimate means. The hammer's hereditary owner, Reginald Windsor was captured and imprisoned by the Dark Irons, his weapon claimed by Dagran.

Emperor Dagran Thaurissan rules alongside Princess Moira of the rival Bronzebeard clan. Debate rages over whether the emperor ensorcelled his bride or she willingly joined him. Whatever the truth, Thaurissan's continued presence bodes ill for the future of his clan. So long as he lives, the Dark Irons will remain pawns of Ragnaros, and a dire threat to kingdoms throughout Azeroth.