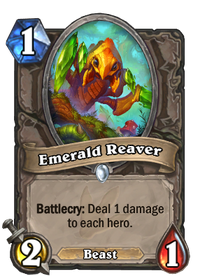 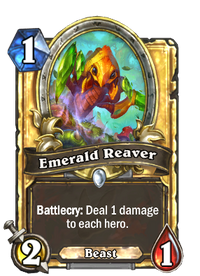 Battlecry: Deal 1 damage to each hero.

Not to be confused with clubbing enthusiast Emerald Raver.

Emerald Reaver is a neutral common minion card, from the Journey to Un'Goro set.

Emerald Reaver can be obtained through Journey to Un'Goro card packs, or through crafting.

This card is an aggressive 1-drop. Its effect is not very powerful, but can give aggro decks a small head start, especially since they care less about their health total.
In Hunter decks, the Beast type can add extra synergy value to this card. It can also work towards The Marsh Queen.

This minion appears to be a silithid reaver.

From Wowpedia:
Silithid reavers, called qiraji battle tanks when used as a mount, are the main attack troops of the silithids. They are very aggressive. Reavers are morphologically similar to the silithid wasp, except with underdeveloped vestigial wings.