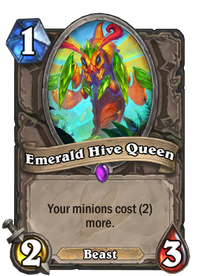 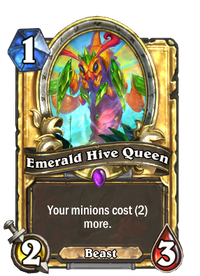 She rules the emerald hive at the end of the yellow brick trail.

Emerald Hive Queen is an epic neutral minion card, from the Journey to Un'Goro set.

Emerald Hive Queen can be obtained through Journey to Un'Goro card packs, or through crafting.

A powerful board-control minion that fits well into a deck not looking to play many minions in the early game. Its stats let it trade well, and unlike other overstatted 1-mana minions, it doesn't directly give your opponent an advantage.

If not drawn in the early game, Hemet, Jungle Hunter can be used to remove it from your deck, to stop it from being drawn when it is no longer useful.

Flavour text references the Emerald City, as featured in the Wizard of Oz books.