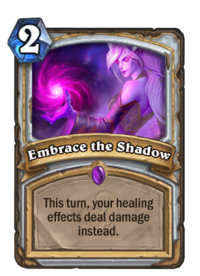 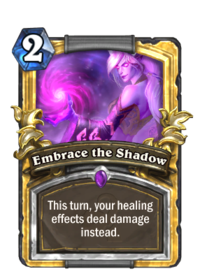 This turn, your healing effects deal damage instead.

Embrace the Shadow is an epic priest spell card, from the Whispers of the Old Gods set.

Embrace the Shadow can be obtained through Whispers of the Old Gods card packs bought through the ingame Shop, purchased online from the Battle.net shop, or through crafting.

See Auchenai Soulpriest#Strategy for general strategy for this card's effect.

Embrace the Shadow has advantages and disadvantages compared to Auchenai Soulpriest. For decks seeking to maximise their damage-dealing copies of both cards can be included in a deck, giving a very good chance of one being available when needed.

The main advantage of Embrace the Shadow is that at 2 mana it is cheaper than the 4 mana Auchenai Soulpriest, making it easier to fit into combos. The downsides are that it doesn't provide a useful minion, and that it only lasts one turn. However, the latter point can actually be desirable to allow a priest to resume healing the next turn: playing Auchenai Soulpriest on most boards (especially against a deck like Freeze Mage) has the risk of the priest becoming 'stuck' in damage-dealing mode, preventing them from healing at all, and inhibiting the use of cards like Holy Nova.

This spell refers to the potential for a priest to turn toward the Shadow, also known as the Void. The Shadow is the cosmic force from which the Old Gods were created, cast by the mighty void lords from the realm of Shadow to hurtle across the Great Dark Beyond, seeking young worlds on which to gorge themselves, corrupting the world-souls within.

The dark counterpart of the Light, the source of the priest's healing and Holy powers, the Shadow is a rich source of dark and damaging magics. Shadowform, Mind Blast, Mind Control, Shadow Madness and the Shadow Words Pain, Death and Horror are all Shadow magic.

While most priests study the Light, the Shadow waits ready to offer its dark and tempting powers to any willing to embrace it. Some devote themselves entirely to this dark path, while others choose to learn a little of the Shadow in order to better understand the greater balance of things. Cabal Shadow Priest, Shadowbomber and Auchenai Soulpriest (which this card's art depicts) are some examples of priests who embrace the path of Shadow. The Shadow is of course not the exclusive domain of priests; warlocks make use of Shadow magic in many of their spells, alongside Fel and Fire magics.

The Void, also referred to as Shadow, dark energy, dark magic, dark or darkness, is one of the two most fundamental forces of the universe, along with the Light. Although the two forces are contradictory by nature, one cannot exist without the other. Although usually dwelling in a realm outside the borders of reality, shades of the Void occasionally seep into the physical universe, manifesting as shadow magic. The Void is a dark and vampiric force that seeks to devour all energy and to twist creation into feeding upon itself. The void can be a source of terrible power, but it is the kind of power that comes at a price.

The Light in which many priests bathe is brilliant and effervescent, granting them immense divine power. But the brightest light casts the darkest shadow—and from within this blackness, a rival power dwells. Shadow priests fully embrace this opposing polarity, their faith equally resolute as their holy counterparts—but focused on shadowy magics and mental manipulation. Like all priests, they dedicate much of their lives to worship—but they derive their power from the Void, straying dangerously close to the domain of the Old Gods. To truly understand such ancient, corruptive influence is to be driven mad. This is the state in which these dark priests thrive, embracing insanity and feeding off of the minds of their opponents to reach terrifying new limits. 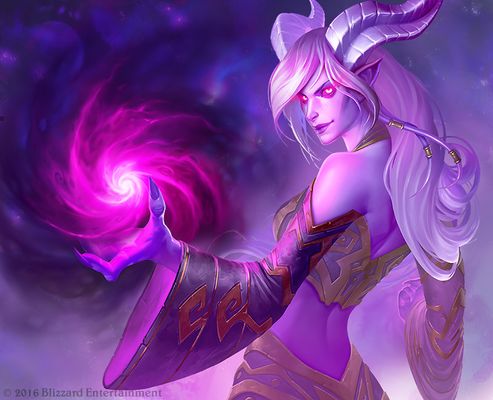