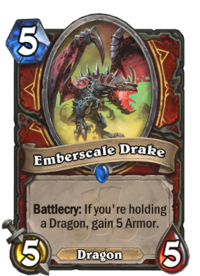 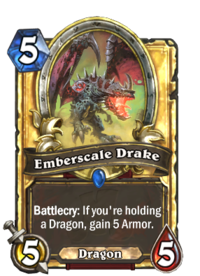 Battlecry: If you're holding a Dragon, gain 5 Armor.

The third little dragon made his armor out of adamantite.

Emberscale Drake is a rare warrior minion card, from the Rastakhan's Rumble set.

Emberscale Drake can be obtained through Rastakhan's Rumble card packs, or through crafting.

The Emberscale Drake is a central card for Dragon Warrior decks. As Warriors have access to several other strong dragons like Dragonmaw Scorcher and Crowd Roaster, as well as ways to generate even more with Dragon Roar and War Master Voone, satisfying the requirement for it's battlecry should be easy. The Emberscale Drake's strong and balanced stats, in addition to the armor which is the equivalent to 2.5 hero powers, all make it a strong play from the mid-game onwards.