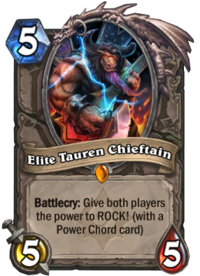 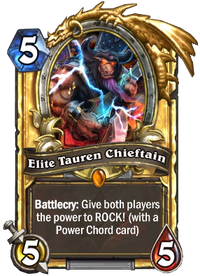 Battlecry: Give both players the power to ROCK! (with a Power Chord card)

He's looking for a drummer. The current candidates are: Novice Engineer, Sen'jin Shieldmasta', and Ragnaros the Firelord.

Elite Tauren Chieftain is a legendary neutral minion card, inducted into the Hall of Fame set, formerly from the Promo set.

Regular Elite Tauren Chieftain can be obtained through crafting:

Golden Elite Tauren Chieftain can only be obtained as a promotion from purchasing a ticket or virtual ticket to Blizzcon 2013. These tickets are no longer for sale, but players who have already purchased one can obtain a single copy of this minion by logging into the game.[1]

Golden Elite Tauren Chieftain is uncraftable and cannot be crafted or disenchanted. 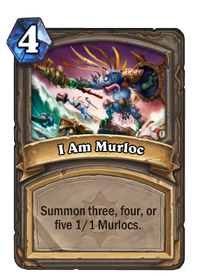 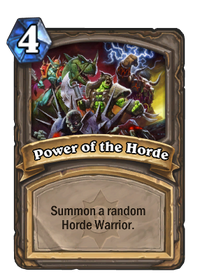 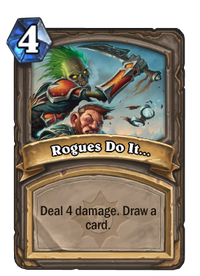 I Am Murloc[edit | edit source]

This is a great card for any deck featuring minion buffs, especially murloc buffs, but is very weak against AoE. At least three 1/1 murlocs are guaranteed.

Power of the Horde[edit | edit source]

Summons a single minion for the player. Possible minions summoned are:

This is by far the most unpredictable option, with the potential to be one of the strongest or the weakest of the Power Chords.

A reliable option, serving as combined damage and card draw. Good for removal, this card can also be useful for finishing the enemy hero.