Elise Starseeker is a hero that the player can pick in the Battlegrounds game mode. 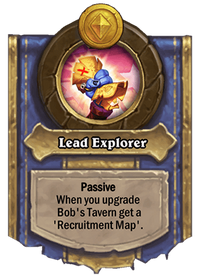 Elise's Recruitment Maps give her access to new minions from each tier far more readily than most heroes, especially at tiers 5 and 6. As these minions are relatively scarce and few in variety, getting a specific one is easier with her Recruitment Maps than by refreshing. Ideally, you should try to build a synergistic board from your Discovered minions and recruit future minions based on those.