The Elemental Lords are: Neptulon, Ragnaros the Firelord, Al'Akir the Windlord , and the reversed Ragnaros from Whispers of the Old Gods, Ragnaros, Lightlord. 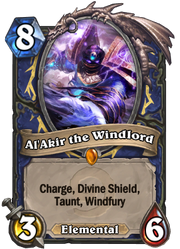 From Wowpedia: Al'Akir the Windlord was the Elemental Lord of air. He ruled over his domain of Skywall from his seat at the Throne of the Four Winds. He was once the foremost tactician in the Old Gods' horrific armies. Aligned with the corrupted Dragon Aspect Deathwing and his fellow Elemental Lord Ragnaros the Firelord in their efforts to usher in the end of days, Al'Akir was defeated by the mortal champions of Azeroth, who were able to enter Skywall from the breach in Uldum and destroy the Windlord within his own sanctum.

From Warcraft: The Roleplaying Game:

Al'Akir the Windlord is absolute ruler over the skies, air and storms. He is the weakest of the four Elemental Lords of the Old Gods. His domain is the sky over the Elemental Plane, which touches all of the other elements. Consequently, it "...interacts with them more than any other, and yet he is the most capricious and aloof of all the Lords. He is as likely to stir up trouble one day as he is to casually ignore incursions the next." His mood can quickly change, much like the weather. He is revered by all air elementals and creatures that fly. It is said that he is aware of all air spells that are cast anywhere throughout the multiverse - although this might be true, he rarely becomes personally involved in their resolution unless they affect him directly. 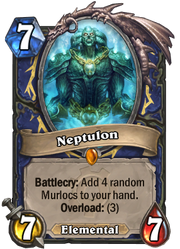 Neptulon is a legendary shaman minion card, from the Goblins vs Gnomes set.

Neptulon the Tidehunter is one of the four Elemental Lords. He fought against the Titans. He did not ally himself with Deathwing, and his current status is unknown.

The Old Gods' armies were led by the powerful Elemental Lords: Ragnaros the Firelord, Therazane the Stonemother, Al'Akir the Windlord, and Neptulon the Tidehunter, who is the strongest of them all. Their chaotic forces raged across the face of the world and clashed with the colossal Titans. Though the elementals were powerful beyond mortal comprehension, their combined forces could not stop the mighty Titans. One by one, the elemental lords fell, and their forces dispersed.
The Pantheon shattered the Old Gods' citadels and chained the four elemental gods far beneath the surface of the world. Without the Old Gods' power to keep their raging spirits bound to the physical world, the elementals were banished to an abyssal plane, where they would contend with one another for all eternity. With the elementals' departure, nature calmed, and the world settled into a peaceful harmony.
For more info, see Neptulon. 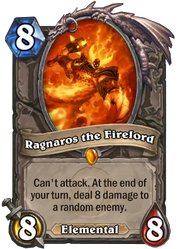 Ragnaros the Firelord is a legendary neutral minion card, from the Classic set.

Ragnaros, Lightlord is a legendary paladin minion card, from the Whispers of the Old Gods set.

This is the "uncorrupted" version of Ragnaros the Firelord. Inspired by the awakening of the Old Gods, the evil Elemental Lord has transformed into a being of light and healing, with his end of turn effect restoring Health to friendly targets instead of reducing enemy minions to cinders.

According to Ben Brode:

"We knew we wanted to flip a lot of characters from good to evil in this expansion. We also knew that Ragnaros (once enslaved by the Old Gods) could be fun to see flip in the same way. The problem is, Ragnaros is already a terribly evil Elemental Lord. So we went the other way with it and explored what he might look like if he were “uncorrupted”. Paladins in general are the one bastion of hope in Whispers of the Old Gods, with many of their cards themed around standing against the oncoming darkness. Having Ragnaros lead the charge against his former masters seemed like it could be pretty awesome. Hence, Ragnaros, the Lightlord!"

In the alternate reality into which Whispers of the Old Gods provides a glimpse, all four Old Gods are awake (and alive), and have been unleashed upon Azeroth. While this has corrupted many of the world's inhabitants, others such as Ragnaros have been inspired by this cataclysm to forsake his evil ways, rising to stand and fight against the ancient horrors.

Like many of the cards in the Whispers of the Old Gods set, this card is not intended to be canon.