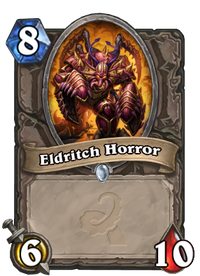 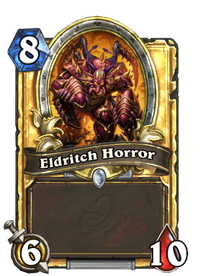 Often wonders what path his life might have taken if he wasn't named, you know, "Eldritch Horror".

Eldritch Horror is a common neutral minion card, from the Whispers of the Old Gods set.

Eldritch Horror can be obtained through Whispers of the Old Gods card packs, or through crafting.

For such an expensive minion, this card has no immediate impact on the game, similar to Faceless Behemoth. This card is therefore considered below average. While its stats mean it is still a solid late game body, it runs the risk of being efficiently removed by cards like Shadow Word: Death, Deadly Shot or Hex.

However, this card is good in Arena, where it's much more difficult to deal with powerful minions due to the lack of removal.

The Eldritch Horror appears to be a C'Thrax, or "faceless general".

The C'Thraxxi (singular: C'Thrax), commonly referred to as faceless generals, are monstrous warbringers that are larger and more resilient than other n'raqi. Possessing great strength and brutal intellect, their dark powers can drive even titan-forged to madness. C'Thraxxi are easily distinguishable from lesser faceless ones by their enormous size and more arthropod-like features. They usually serve as protectors and commanders within places of great importance to the Old Gods.