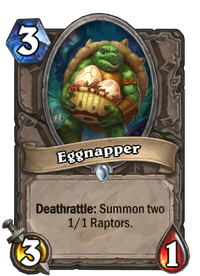 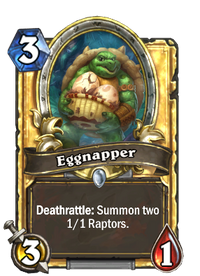 Often misunderstood, it's just that he likes to use the eggs as pillows.

Eggnapper is a neutral common minion card, from the Journey to Un'Goro set.

Eggnapper can be obtained through Journey to Un'Goro card packs, or through crafting. 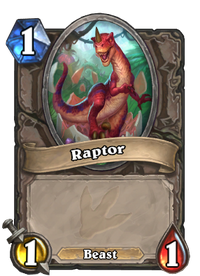 A minion with aggressive stats - though its 1 Health makes it vulnerable to pings and cheap removal, the token-spawning Deathrattle makes this minion tricky to fully deal with. As the Raptors spawned are Beasts, Hunters and Druids may find some extra value from this minion.

This minion can be compared to alternative 3-drops like Scarlet Crusader (whose Divine Shield also makes it tricky to remove) and Harvest Golem (harder to kill at first but weaker Deathrattle).