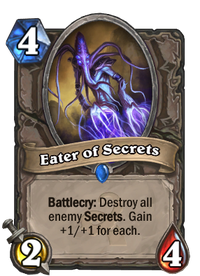 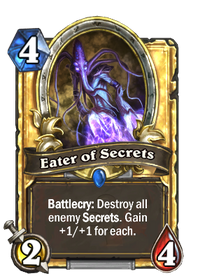 Battlecry: Destroy all enemy Secrets. Gain +1/+1 for each.

You don't want to be around after it has eaten an explosive trap. You thought Sludge Belcher was bad...

Eater of Secrets is a rare neutral minion card, from the Whispers of the Old Gods set.

Eater of Secrets can be obtained through Whispers of the Old Gods card packs, or through crafting.

Eater of Secrets is a specific anti-Secret tech card. The most obvious reason for using this card is decks such as Secret Paladin, a paladin deck which uses Mysterious Challenger to put several Secrets into play in a single turn. Other examples include Freeze Mage (Ice Block, Ice Barrier) and various hunter decks (Explosive Trap, Freezing Trap, Snake Trap).

However, Eater of Secrets needs to destroy a Secret to get its value, otherwise it is an expensive 2/4 minion for 4 mana. This makes it desirable in a meta where Secret-using decks are very popular, or to complement a deck that is otherwise highly vulnerable to Secret decks. In the right situations Eater of Secrets can be an extremely powerful and useful card, but outside of these encounters it is generally very poor.

Because Eater of Secrets' Battlecry destroys any Secrets before they trigger, it can be safely played against Secrets such as Sacred Trial despite of the board state, or Snipe.

Compared to other Secret tech cards, Eater of Secrets has the worst base stats if it does not remove any Secrets, and still below average than Kezan Mystic and SI:7 Infiltrator if used against one Secret. When multiple Secrets are in play, however, it fares much more effectively, and compared to Chief Inspector, it costs 1 mana less.

Summon
I know who you are.
Attack
Delicious!

This minion is seemingly unique to Hearthstone, but appears similar to a n'raqi. 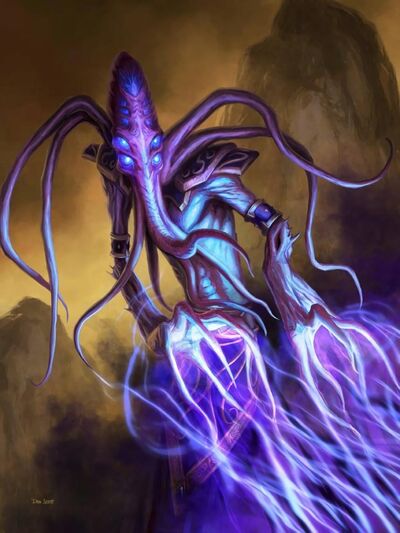