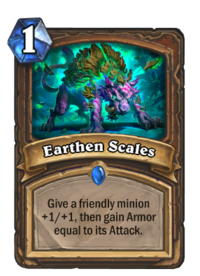 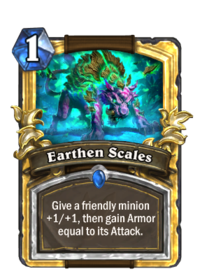 Give a friendly minion +1/+1, then gain Armor equal to its Attack.

You can make your own Earthen Scales at home. Step 1: Roll around in the dirt. Step 2: Magic.

Earthen Scales is a rare druid minion card, from the Journey to Un'Goro set.

Earthen Scales can be obtained through Journey to Un'Goro card packs, or through crafting.

This is a versatile card that can be used in multiple ways. When used in the early game, the +1/+1 on a minion can allow for better trades, giving the player an early board advantage. In the late game, the +1 attack can allow a player to break through a taunt wall. When used on a large minion, the armor gain can also have significant impact.