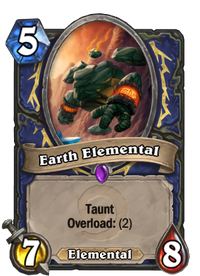 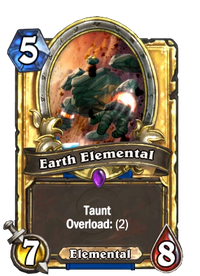 For the boss card in Book of Heroes, see Earth Elemental (boss).

Earth Elemental is an epic shaman minion card, from the Classic set.

Earth Elemental will be a part of the upcoming Core set with the following appearance:

As a 5 mana 7/8 minion with Taunt the Earth Elemental provides both strong defensive and offensive abilities. However its drawback is the hefty 3 mana Overload cost, which can come back to haunt you if the Earth Elemental gets immediately countered. Be cautious about playing it while your opponent still has cards and removal options remaining.

The combo of dropping the Earth Elemental and buffing him with Windfury the next turn makes for a swift game-changer.