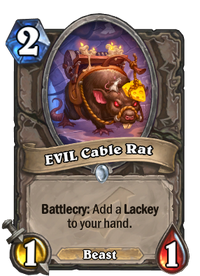 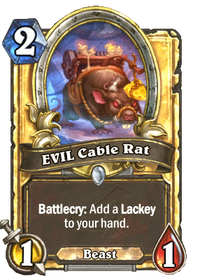 Battlecry: Add a Lackey to your hand.

Gradually driven to darkness by the promise of unobtainable cheese.

EVIL Cable Rat is a common neutral minion card, from the Rise of Shadows set.

EVIL Cable Rat can be obtained through Rise of Shadows card packs, through crafting, or as an Arena reward.

EVIL Cable Rat generates one of the following cards at random.

Even though its stats are poor, EVIL Cable Rat has a very strong Battlecry effect. Lackeys all have useful abilities and come with a 1/1 body. While it might not seem like much, generating two minions can be important for Tempo and Aggro decks. It's also a Beast, which can provide some synergy for Hunter and Druid.

EVIL Cable Rat is the only way for Druids, Paladins, Mages, Hunters, and Demon Hunters to naturally create Lackeys. Because of this, it's especially desirable in those classes since Lackeys are quite strong.