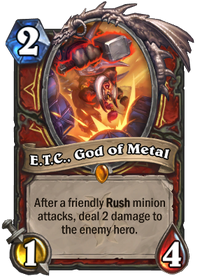 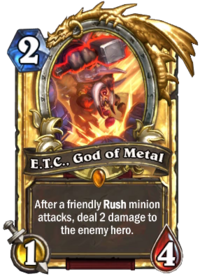 After a friendly Rush minion attacks, deal 2 damage to the enemy hero.

There are Old Gods and then there are Rock Gods.

E.T.C., God of Metal is a legendary warrior minion card, from the Madness at the Darkmoon Faire set.

E.T.C., God of Metal can be obtained through Madness at the Darkmoon Faire card packs, through crafting, or as an Arena reward.

At the baseline, E.T.C., God of Metal can be used in a midrange Warrior deck to poke at the opponent while controlling the board with Rush minions. It has particular synergy with Bumper Car.

E.T.C. can more commonly be used as an OTK enabler, or at the very least a card capable of high burst to end games. Start with Pen Flinger to cheaply damage E.T.C., then copy him with Bloodsworn Mercenary. Play Animated Broomstick to give your minions Rush, trading one minion in to free board space, then copy E.T.C again with a second Mercenary. letting each attack deal 6 damage to the opponent. At the baseline, this combo will deal at least 34 damage, and can deal even more if all three E.T.C.s are able to attack without dying. This does require your opponent to have enough targets to attack into, however.

Elite Tauren Chieftain is a real-life band comprised of Blizzard employees, known for performing their own hard-rocking material with lyrics set in the Warcraft universe. Elite Tauren Chieftain often perform at BlizzCon and have released several singles. They also feature in-game in Shattrath City, in Blackrock Depths' Grim Guzzler, and of course the Darkmoon Faire.