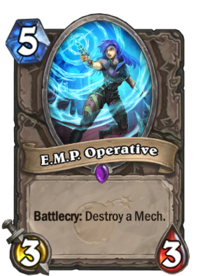 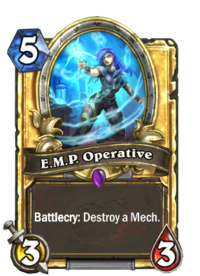 "I said this looks like a job for me
So everybody just follow me
'Cause we need a little E.M.P.
'Cause it feels so mechy without me…"

E.M.P. Operative is an epic neutral minion card, from The Boomsday Project set.

E.M.P Operative is a potentially powerful tech card against heavy-Mech metas; but due to the cards quite weak statline and it's situational nature, generally there are many better options for hard removal.

This card is a quite weak draft pick in Arena due to the inconsistency of finding a specific tribe; as a result, strong standalone minions are preferable.

Summon
This update is mandatory.
Attack
All too easy.