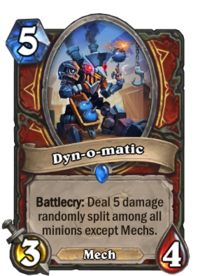 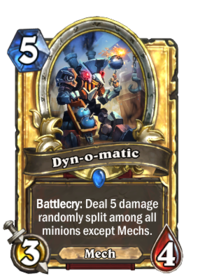 Battlecry: Deal 5 damage randomly split among all minions except Mechs.

Dyn-o-matic is a rare warrior minion card, from The Boomsday Project set.

Dyn-o-matic can be obtained through The Boomsday Project card packs, or through crafting.

Dyn-o-matic is comparable to Madder Bomber, trading 1 less damage for greater reliability. As it will never hit heroes or Mechs, the damage dealt by its Battlecry can be more easily directed to remove two or three small minions or a single medium-sized one, making it a decent removal option for Control Warrior and Mech Warrior. While this also makes it very weak against Mech decks, it can still be used to trigger on-damage effects like Acolyte of Pain or Armorsmith.