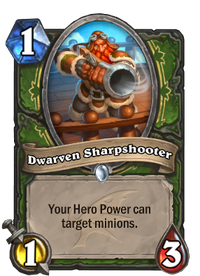 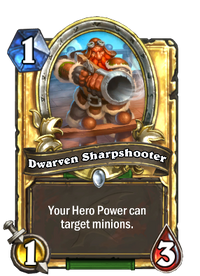 Your Hero Power can target minions.

Scissors, knives, needles, you name it! He'll shoot it.

Dwarven Sharpshooter is a common hunter minion card, from the Descent of Dragons set.

Dwarven Sharpshooter can be obtained through Descent of Dragons card packs, through crafting, or as an Arena reward.

On top of having premium statline for a 1-drop, being able to use your Hero Power to deal 2 damage for removal is exceedingly useful. It has an advantage over Steamwheedle Sniper in that you can play your Hero Power on curve. It fits well on a midrange-style Hunter deck for keeping the early game in control, moreso than an aggressive deck that wants to hit face as often as possible. It's a welcome addition to decks that use other Hero Power synergy cards like Dragonbane and Toxic Reinforcements.

Summon
Nothing but a bunch of big bats!
Attack
Gotcha!