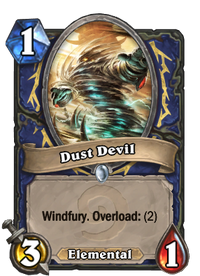 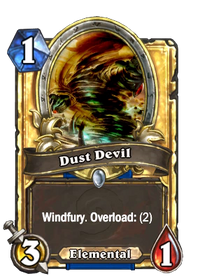 Westfall is full of dust devils. And buzzards. And crazed golems. And pirates. Why does anyone live here?

Dust Devil is a common shaman minion card, from the Classic set.

Dust Devil can be obtained through Classic card packs, through crafting, or as an Arena reward.

Dust Devil is a strong early game card, but due to its low health can be easily cleared off the board. However, if it stays alive for a few turns it can deal massive damage thanks to its Windfury ability. Due to both its low health and Windfury, the Devil is best suited for directly attacking the enemy hero.

With the right conditions, Dust Devil can be extremely effective as a turn one summons. If the opponent is unable to counter it, the Devil can deal substantial damage before it is removed. However, this strategy is not without risks, due to the card's Overload cost and its single point of Health. If the opponent does remove the minion, its Overload means you will start your second turn with 0/2 mana and nothing to show for it.

It is not recommended to play Dust Devil as a turn one rush against any deck which is able to wipe it off the board right away, namely mages, druids, rogues, and demon hunters, which can all remove it using their respective Hero Powers. Other classes are also capable of removing it using cards such as Elven Archer, but without the right cards may be unable to respond quickly. The Dust Devil's low health also makes it far less effective once the opponent has a taunt on the board.

In Wild format, you can use Whirling Zap-o-matic instead: it has 2 Health, costs 2 mana with no Overload and is a Mech, so it can benefit from and provide Mech synergy, such as Wargear or Tinkertown Technician.